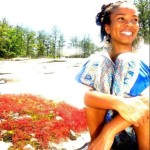 Dr. Chelsea Jackson is the founder and co-director of Yoga, Literature, and Art Camp for teen girls at Spelman College, creator of Chelsea Loves Yoga, member of the Yoga and Body Image Coalition, and is featured on the June cover of Yoga Journal magazine.

She has extensive experience in the field of education as a former public school teacher and received her doctoral degree in Educational Studies.

Chelsea also completed trainings in Atlanta and New York City, specifically for instructors who work with children and teens. It was during Chelsea’s training for Restorative Justice at the University of Wisconsin, Madison facilitated by Sujatha Baliga that she began making connections between the value of storytelling, critical literacy development, and yoga.